Most global investors have exposure to state-owned enterprises (SOEs)—and many may not even know it. Well-known companies such as NTT in Japan and Deutsche Post/DHL in Germany are examples of such enterprises. Even in the United States, organizations such as the Federal National Mortgage Association are effectively government owned.1 The common theme across SOEs is that they were created by local or central governments for a specific purpose and these governments retain a significant ownership stake. For the purposes of this paper, we define companies as SOEs if state ownership exceeds 20%. This threshold suggests that the government has significant influence over company operations, board membership, and policy.

While SOEs may sound like a throwback to an era when government participation and economic control were in vogue, such enterprises are increasing in number on the global scene, not decreasing. The percentage of SOEs in the Fortune Global 500 has increased from 9% in 2005 to 23% in 2014, largely driven by the rise of Chinese companies, as shown in Figure 1.

Although SOEs still exist in many developed markets, it is in emerging markets where these companies are most economically relevant. As shown in Figure 2, Russia and former Soviet countries in Eastern Europe dominate the list with the greatest proportion of SOEs by market capitalization, but most of these equity markets are relatively small. The exception is China, the world’s second largest market. With nearly 50% of its companies under government control, Chinese SOEs translate to nearly a 2% weight in the MSCI All-Country World Index and 15% in the MSCI Emerging Markets Index.2

Given the size and growing importance of the Chinese equity market, the remainder of this discussion will focus on the impact and prospects for SOEs in this country.

Within China, most of the largest companies are SOEs. Five of the largest enterprises as measured by revenue are SOEs, including State Grid (the second largest employer in the world after Walmart), Sinopec, and Industrial and Commercial Bank of China.3 Though SOEs dominate energy and financials, they are present within all sectors in China, including healthcare and technology (see Figure 3).4

Given the dominance of SOEs in the Chinese economy and equity market, one may wonder how well these stocks have performed. The answer is dependent on the timeframe, as there have been two distinct periods of relative performance: pre- and post-2008, as shown in Figure 4. 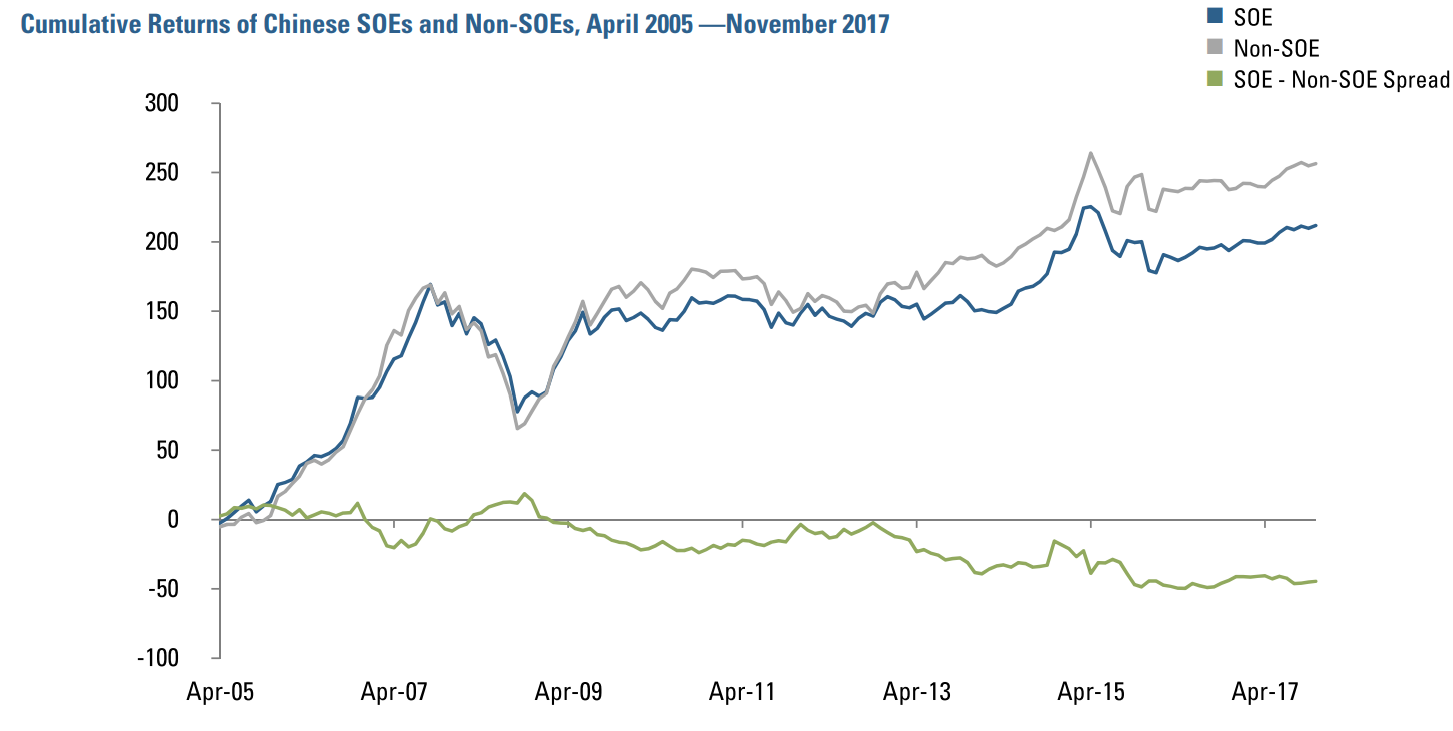 Source: Acadian. For illustrative purposes only. Past results are no guarantee of future results. Investors have the opportunity for loss as well as profits.

From 2005 through 2008, SOEs in China generally kept pace with the performance of non-SOEs, while delivering modestly better cumulative returns through October 2008. Reasons for this include easier access to capital, protection from competition, and preferential treatment in receiving state contracts. However, post-2008, SOEs have consistently underperformed privately owned companies. Why this change? The answer appears to be a combination of over-investment and excess debt in SOEs coinciding with the reduction of domestic and global economic growth following the global financial crisis. Part of the Chinese government’s response to this slowdown was an increase in expenditures and investment to maintain overall economic activity. SOEs were encouraged to increase their asset base, which required taking on additional debt, but these investments proved to be of limited profitability. The return-on-assets (ROA) of Chinese SOEs versus non-SOEs in Figure 5 reflects the evidence of over-investment in SOEs pre-GFC. Asset growth combined with higher debt service and lower profitability following the financial crisis led to a significant decline in the ROA for these companies from which there has yet to be a full recovery.

Source: Acadian. For illustrative purposes only. Past results are no guarantee of future results. Investors have the opportunity for loss as well as profits

There is evidence in this post-2008 period that tilting towards select value, analyst sentiment, and industry trend signals has helped to identify Chinese SOEs with above-average return prospects. Figure 6 shows results from predictive multivariate regressions of SOE returns on selected factor exposures. Only Change in Analyst Recommendations and Price to Asset Value (which includes Price/Book among other asset-based measures) are statistically significant at greater than a 95% level, but others, including Industry Leadership (which measures how companies follow their largest industry leaders), have shown some efficacy. Note that the State Ownership Percentage did not have a significant influence on the returns among SOEs. It appears that investors are not sensitive to levels of control over the 20% threshold that we have adopted for this paper.

Source: Acadian. For illustrative purposes only. Past results are no guarantee of future results. Investors have the opportunity for loss as well as profits.

The Future Of Chinese SOEs

Having witnessed both outperformance and, more recently, underperformance of SOEs in China, investors may wonder how well SOEs will do going forward. In general, we expect SOEs to underperform. Reasons for this include: political patronage in the appointment of executives, a culture of fraud, poorly incentivized performance, a lack of autonomy, and objectives other than maximizing shareholder value.

Will the importance of SOEs in the Chinese economy require that they counter these trends and improve—or will these disadvantages further weigh on their performance? In the near-term, SOEs will continue to dominate the Chinese economy with the government retaining control of a number of key and strategic enterprises. Although there has long been talk of reform, many challenges continue to stand in the way, including, for example, the fact that SOE executives often outrank regulators in the Chinese Communist Party or local governments, weakening enforcement capabilities.

However, change may finally be on the horizon. President Xi Jinping has called for broad SOE reform, emphasizing more operational transparency, greater foreign and domestic competition, and other marketoriented reforms. In recent quarters, cuts in over-capacity, reduction in debt, and mergers among SOEs have occurred. Although valuations for SOEs remain below those of private companies, profitability has been improving. These are promising—if tentative—signs.

SOEs remain a considerable presence among emerging markets, especially in China. Many have been extremely successful and joined the ranks of some of the largest global companies. But in recent years their performance has lagged that of non-SOEs in China, and we believe that exercising care in stock selection, emphasizing value, analyst sentiment, and industry trends may help investors achieve superior performance within the broad universe of Chinese SOEs.

Interestingly, although all five of the largest companies in China as measured by revenue are SOEs, three of its five largest by capitalization are privately owned: Tencent, Alibaba, and Baidu. If capitalization is a more accurate measure of the market’s view of future prospects and profitability, then non-SOEs may continue to grow in importance in China. However, if announced reforms are effectively implemented, then SOEs may remain a critical component of the Chinese economy—and of investors’ portfolios—for years to come.

Acadian provides this material as a general overview of the firm, our processes and our investment capabilities. It has been provided for informational purposes only. It does not constitute or form part of any offer to issue or sell, or any solicitation of any offer to subscribe or to purchase, shares, units or other interests in investments that may be referred to herein and must not be construed as investment or financial product advice. Acadian has not considered any reader’s financial situation, objective or needs in providing the relevant information.

Acadian Asset Management (Australia) Limited (ABN 41 114 200 127) is the holder of Australian financial services license number 291872 (“AFSL”). Under the terms of its AFSL, Acadian Asset Management (Australia) Limited is limited to providing the financial services under its license to wholesale clients only. This marketing material is not to be provided to retail clients.

Acadian Asset Management (UK) Limited is authorized and regulated by the Financial Conduct Authority (‘the FCA’) and is a limited liability company incorporated in England and Wales with company number 05644066. Acadian Asset Management (UK) Limited will only make this material available to Professional Clients and Eligible Counterparties as defined by the FCA under the Markets in Financial Instruments Directive.