In this note, we explain key elements of the changes and how they will likely affect benchmark equity indexes and Acadian’s process.


Rationale For The Change


The revisions to GICS classifications reflect developments in communications industry structure and breadth. First, the creation of a new Communication Services sector acknowledges a dramatic transformation in how people interact and how they consume entertainment and information, which has been associated with a convergence among telecom, media, and internet companies.

Second, for the purposes of financial practitioners, S&P Dow Jones and MSCI contend that the Internet Software & Services industry has become too large and diverse to be useful for analysis or index construction. As a result, this industry will be discontinued in October. Its current members, including Facebook and Alphabet, will be repositioned, with the vast majority finding their new home in the Communication Services sector. Others will migrate to Consumer Discretionary or join new or existing sub-industries in Information Technology.

Retirement of IT’s Internet & Software and Services sub-industry will require reclassification of its constituents. These include members of key benchmark indexes, for example 25 stocks in the MSCI World Index (based on April 30, 2018 composition) and 5 stocks in the S&P 500 Index. Figure 2 shows the top 10 affected companies. 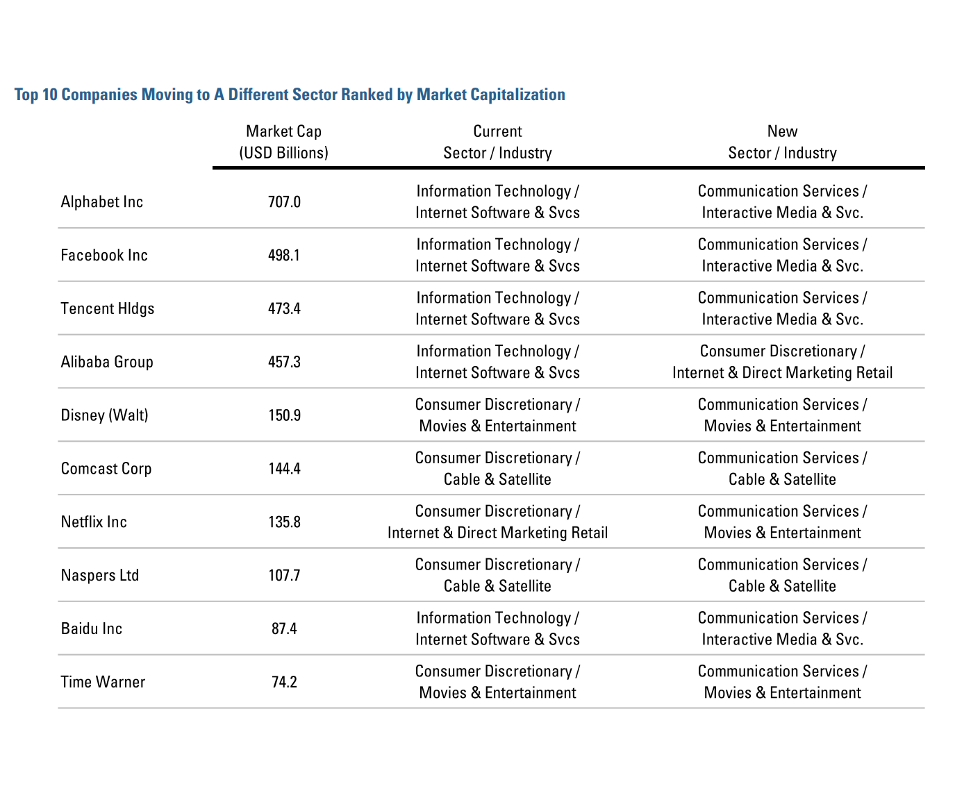 For illustrative purposes only. This should not be considered a recommendation to buy or sell any specific security.

The overall set of changes is large enough to materially affect sector compositions of benchmark indexes.

S&P 500: We anticipate that 22 companies will be re-categorized. The Communication Services sector will take 19 of them, 14 from Consumer Discretionary and 5 from Information Technology. Similar to the MSCI World Index, S&P 500’s Information Technology grouping will relinquish EBay Inc. to Consumer Discretionary.2 As a result, the weight of the Communication Services sector will jump from 1.9% to 9.9%, as shown in Figure 4.

Currently, the Telecommunication sector contains only Century Link Inc., AT&T Inc., and Verizon Communications Inc. The addition of Alphabet and Facebook alone will account for a 4.5% increase in weight. Additions of Walt Disney, Comcast, and Netflix from Consumer Discretionary will contribute another 2%. The weight of the Information Technology sector will fall from 24.8% to 19.6% following the reclassification of several large stocks. Consumer Discretionary’s weight will fall from 13.4% to 9.9%.


The transformed GICS structure will better align with current economic realities and provide clearer sector, industry, and sub-industry definitions. These changes will influence Acadian’s process through a few channels.

The GICS changes will also influence our top-down model, which relies on GICS for industry classifications, although we do not expect the changes to have a meaningful impact on our process. Acadian is currently phasing out its single top-down model and in its place, integrating three separate models: country, industry, and country/industry intersection. All three top-down models generate forecasts for developed markets, emerging markets, and frontier markets. We do not expect the new models to be materially impacted by the reclassifications and may be well suited to acclimate to the GICS modifications due to the new models’ tiered stock evaluation approach. Direct comparisons to the new GICS classifications versus the old, in the context of our new top down models, are essentially moot as the new models are being gradually implemented between now and year-end, and therefore will not have any material history with the old GICS classifications.

The GICS reclassifications will also have some impact on portfolio construction, because we constrain portfolios’ active exposures at the industry group and sector levels. Implementation of the reclassifications may cause a one-time increase in turnover in portfolios where the risk controls now “bind” where they had not previously, or vice versa. We will be able to forecast the impact of the changes with greater precision when the full list of affected stocks is announced on July 2, 2018.


As quantitative investment managers, significant consumers of market data, and users of the GICS framework, Acadian welcomes the upcoming GICS
restructuring, which will better align classifications with economic realities. The last significant GICS change was in 2016 when Real Estate became its own sector. By comparison, the current reclassification is more extensive as it impacts more sectors, industry groups, industries, and sub-industries. Despite the complexity of the reorganization, Acadian believes the revised structure will offer more precise, informative, and economically meaningful categories, each populated by a more homogeneous set of companies. We will closely monitor markets as the implementation of the GICS change approaches later this year although the influence of these changes on our process will be minor. We do not expect that they will materially affect our potential to add value.