Beginning in June 2018, MSCI will include China A-shares, a market previously only available to onshore Chinese investors, in its Emerging Markets Index. This addition is a landmark event as it will increase foreign investment in China A-shares and presents a broader, more diversified set of investment opportunities than currently available through China’s offshore-listed companies. MSCI plans to include 234 China A large-cap securities in the MSCI Emerging Markets Index via a two-step inclusion process that will coincide with the May 2018 Semi-Annual Index Review and the August 2018 Quarterly Index Review. The selected securities will be accessible to investors through the Hong Kong Stock Connect platform and must pass various vetting criteria. As of the June inclusion, A-shares will comprise 0.39% of the Emerging Markets Index’s weight. As of August, this will increase to 0.78%. In coming years, however, full inclusion of China A-shares in the Emerging Markets Index has the potential to increase China’s weight to nearly 50%.1

A-Shares: The Path To Inclusion

MSCI initially included Chinese B-shares in its Emerging Markets Index in September 1996 at a weight of 0.46%. This weight remained reasonably stable until 2000 when MSCI added Hong Kong-traded Chinese equities (e.g., Red Chips, H-Shares), raising China’s index representation above 5%. Figure 1 showcases the weight of China in the MSCI Emerging Markets Index from 2002 through March 2018. Today, prior to the inclusion of onshore A-shares, China comprises close to 30% of this Index. 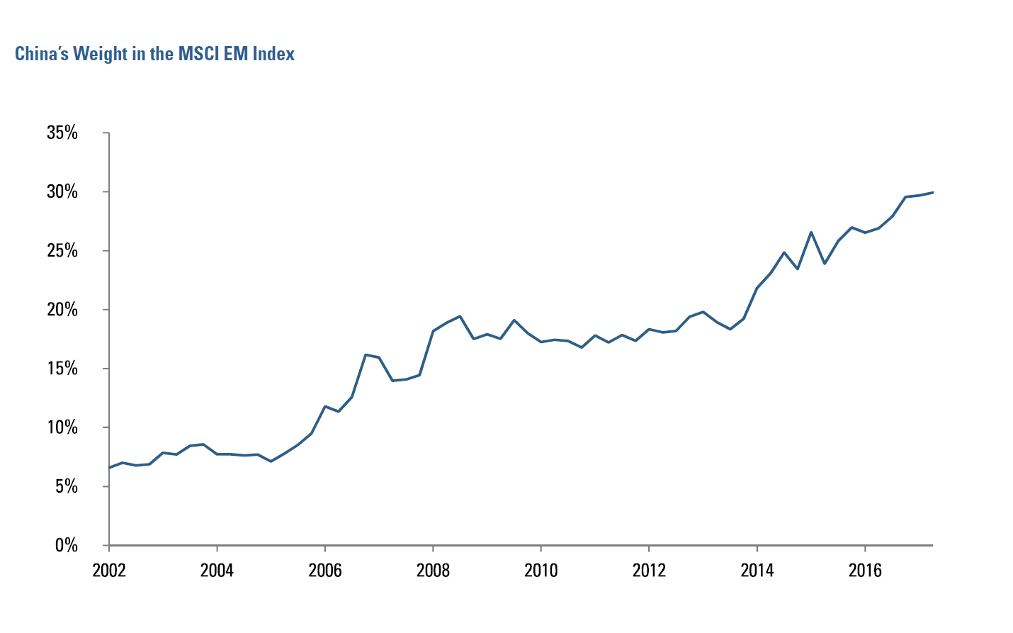 The path to A-shares’ promotion to MSCI’s EM index has been more complicated. When added to the inclusion watch list in 2013, the A-shares market met MSCI’s index criteria for both size and liquidity, but it was denied based on the market’s accessibility to global institutional investors as well as operational concerns.

These access programs have changed the landscape of China’s equity market. Figure 3 shows that China A-share holdings by non-Chinese investors have increased 250% since 2014, when the People’s Bank of China first published the data.3 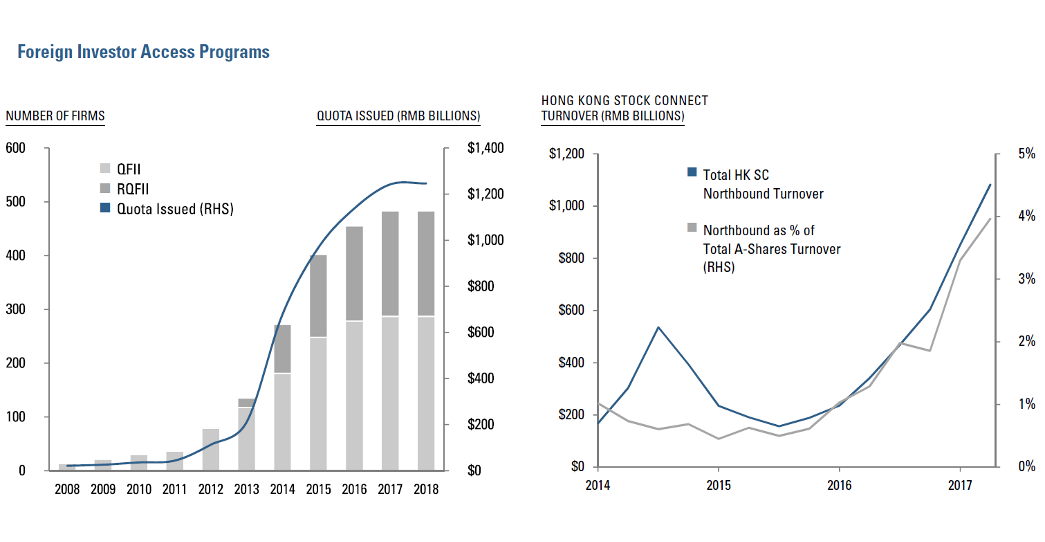 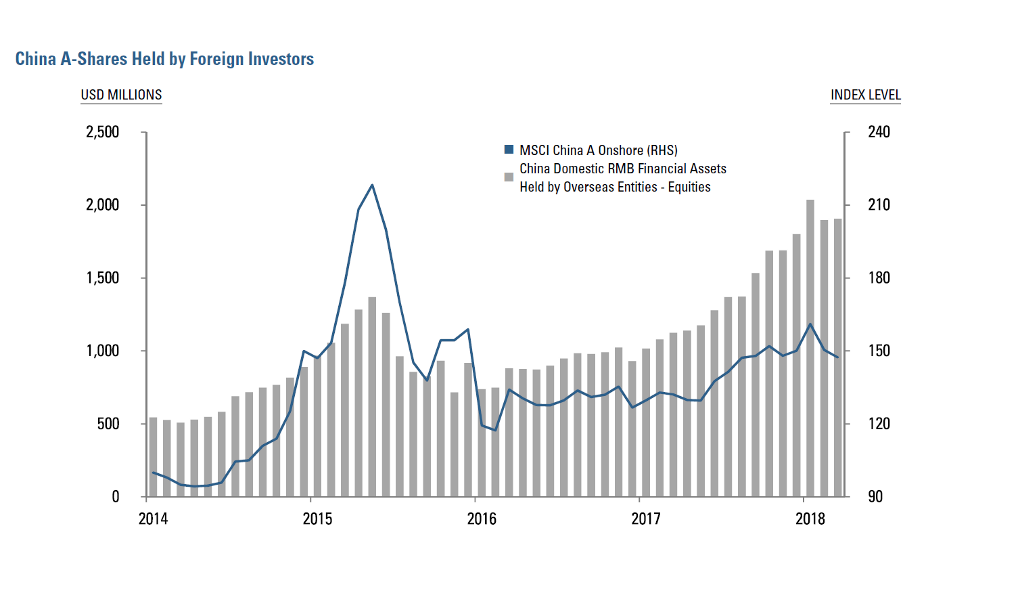 China also implemented reforms to address operational hurdles and align its practices with global markets. In 2013, Chinese officials relaxed repatriation rules and simplified cash management for foreign investors. Capital controls have been loosened, although both index providers and investors would like further easing. Guidelines for quota allocations have become less limiting, a change well received by MSCI. SSE and SZSE have increased transparency and standardization of rules related to stock suspensions, reducing their frequency and duration. Guidance issued on beneficial ownership status has expanded the scope and ease by which foreign investors can claim favorable tax treatment on Chinese sourced dividend income. China has also adopted less restrictive pre-approval requirements for the creation of index-related investment vehicles. While there is still room for operational improvements, e.g., the T+0 settlement cycle and the 10% daily price circuit breaker, progress has been material.

In June 2017, in recognition of access and operational developments, MSCI announced that it would partially include A-shares into the EM index, effective 2018. MSCI continues to monitor improvements and has signaled that increased inclusion of A-Shares would be conditional upon further progress. Specific areas of focus include a continued decline in suspensions and further loosening of pre-approval requirements for index-linked vehicles. MSCI is also looking to see how investors utilize Stock Connect and whether the market further aligns with international access standards.

We expect significant allocations to China over the coming years given China’s growing weight in the index. Currently, $384 billion of passive capital and $1.3 trillion of active capital tracks the MSCI Emerging Markets Index.4 As China’s weight increases, we expect 1) rotation of passive capital into the onshore market and 2) that active managers will increase their exposure. Our prior research on index reclassifications suggests that countries transitioning from lower-demand indices to higher-demand indices face net buying pressure prior to the effective date of index inclusion.5 All of this leads us to believe that an overweight position in China A-shares is compelling given market inefficiencies and opportunity for stock selection. 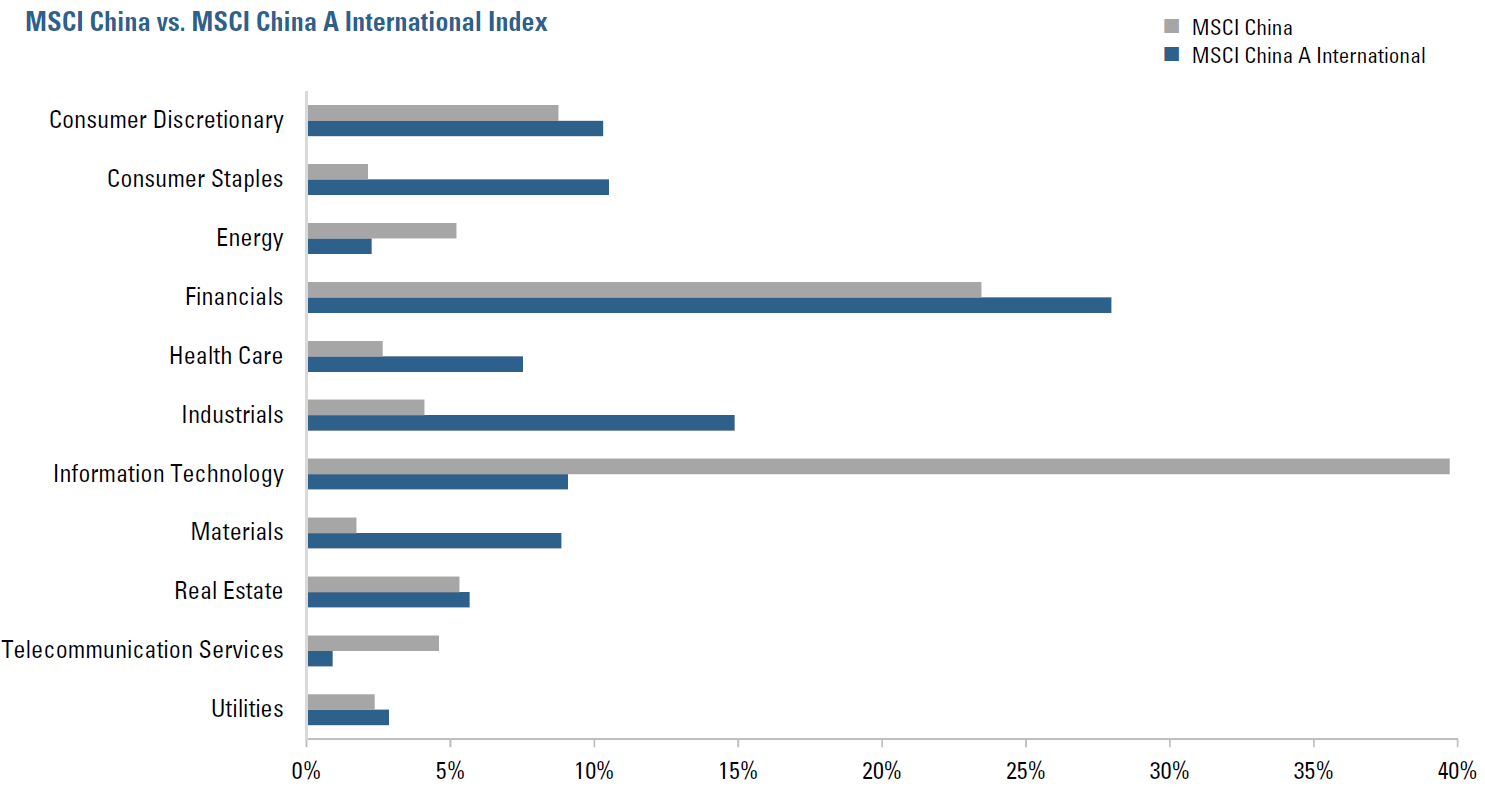 The MSCI China Index captures large and mid-cap representation across China H shares, B shares, Red chips, P chips and foreign listings (e.g. ADRs). With 153 constituents, the index covers about 85% of this China equity universe.
The MSCI China A International Index captures large and mid-cap representation and includes the China A-share constituents of the MSCI China All Shares Index. It is based on the concept of the integrated MSCI China equity universe with China A-shares included.
Source: Copyright MSCI 2018. All Rights Reserved. Unpublished. PROPRIETARY TO MSCI. For illustrative purposes only.

Given China A-shares’ limited initial weighting, the addition event won’t materially change MSCI EM Index composition this year. However, we expect China A’s weighting within the index to grow materially over time. MSCI has indicated that full integration would increase China’s overall EM Index weight from roughly 30% to approximately 42%. Its weight in MSCI’s All-Country World Index would rise from roughly 4% to approximately 7%.

While MSCI has not provided guidance as to timing of further A-shares integration, precedent suggests that full inclusion could occur within 3 to 7 years.6 According to MSCI, further inclusion is contingent upon China granting market access consistent with international standards, as discussed above. Chinese officials understand this and continue to advance market reform initiatives. This April, regulators quadrupled the trade quota allowed through the Hong Kong Stock Connect program, and the country recently opened a Chinese Depository Receipt (CDR) market. The CDR will allow onshore Chinese to invest in companies that trade partially or exclusively offshore (e.g., Alibaba). This should disincentivize companies from listing their shares offshore in the first place and, in the long-term, may be the catalyst for numerous foreign-listed Chinese companies to ‘come home’ and primarily list their shares on the SSE or SZSE. Progress with respect to market liberalizations and reforms could accelerate the MSCI inclusion timetable.

The inclusion of the China A-shares market in the MSCI Emerging Markets Index, while modest in its initial scope, is a milestone event that acknowledges the wide-ranging market reforms implemented by the Chinese government. The market offers exposure to a broad and diversified set of investment opportunities not readily accessible to foreign investors previously. Furthermore, MSCI’s introduction of China A-shares into their indices stands to considerably influence index composition going forward, as its weighting increases to reflect A-shares’ economic significance. Although hurdles to full integration remain, we expect China A-shares to become increasingly important to emerging markets investors around the globe as the market becomes an even more prominent component of widely followed benchmarks.