The global flood of central bank dovishness has continued in 2019. It intensified in June as the ECB reiterated support for negative policy rates “as long as necessary,”1 Australia’s RBA cut rates, and Fed chair Powell suggested scope for further rate cuts after the June FOMC meeting. The U.S. dollar depreciated in the latter half of June as markets extrapolated the Fed’s outlook on growth and inflation to imply multiple rate cuts over the coming year. In this brief note, we examine drivers and implications of changes in the U.S. dollar outlook.

Our Multi-Asset Class USD forecast deteriorated in May and June, as shown in Figure 1, driven primarily by a downturn in market sentiment towards the currency as measured by both spot rates and FX options. Although sentiment partially recovered in July, it remains negative. Stimulus, in the form of declining yields, was a secondary driver. In the weeks since, these factors’ continued downward pressure on the forecast have, thus far, been offset by strong USD carry, i.e., the wide differential between U.S. and other developed market interest rates that has persisted in recent years. But if the Fed delivers on market expectations of substantial rate cuts, then we could see further USD weakness as carry diminishes. In other major developed markets, where rates are already low or negative, interest rate futures are pricing in one rate cut or less (i.e., no more than 25bp) by the end of the year.

U.S. interest rate futures are pricing in more cuts than suggested by the Fed’s dot plot. Propelled by both the dovish Fed outlook and disappointing macroeconomic data, they reflect a modal outcome of three rate cuts this year. This is a stark change from mid-second quarter when the implied modal forecast was for only one rate cut in 2019. (Figure 2)

The extent and rapidity of the shift in expectations reflects interplay between a number of factors. First, reduced growth expectations associated with a drop in Global PMI into contractionary territory in May and June along with concern related to U.S.-China trade tensions. Second, greater perceived room for rate cuts due to recent declines in inflation expectations. Finally, subtle but consequential changes in messaging at the Fed’s early June research conference.2 Specifically, the Fed replaced “Zero Lower Bound” with “Effective Lower Bound,” which signaled to some traders that the central bank is preparing its policy framework for negative U.S. rates. 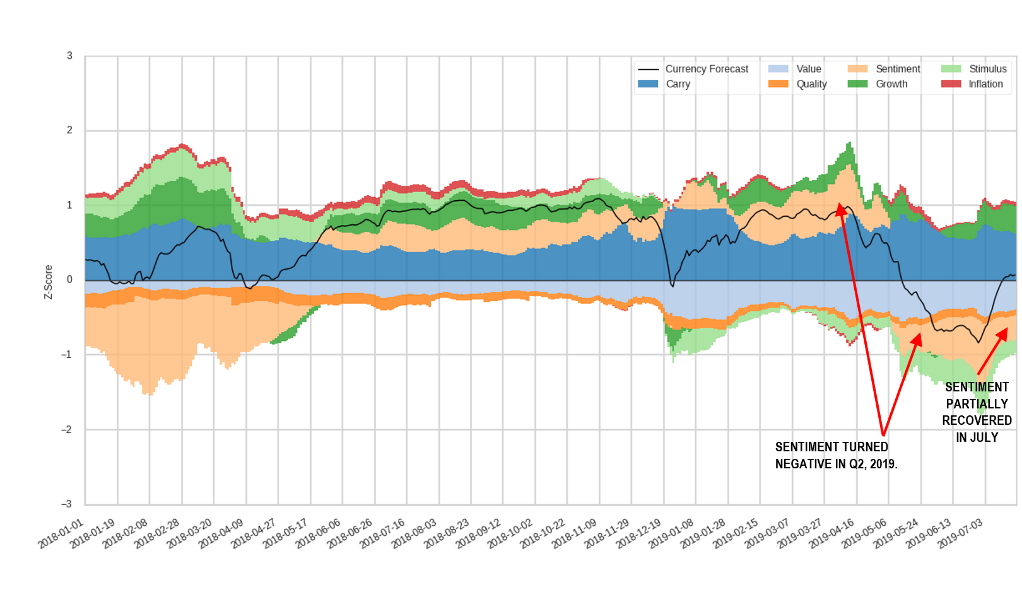 * Forecasts based on the cross-sectional elements in our Multi-Asset Class models. Source: Acadian Asset Management LLC. Return forecasts are shown in z-scores, which can be interpreted as number of standard deviations attractive or unattractive. Return forecast horizon ranges from 1-3 months. The information provided is for illustrative purposes only based on proprietary models. There can be no assurance that the forecasts will be achieved. This is not intended to represent investment returns generated by an actual portfolio. They do not represent actual trading or an actual account but were achieved by means of using Acadian’s Multi-Asset Class universe of securities for the period specified above. Results do not reflect transaction costs or other implementation costs. Past results is no guarantee of future results. Every investment program has an opportunity for losses as well as profits. 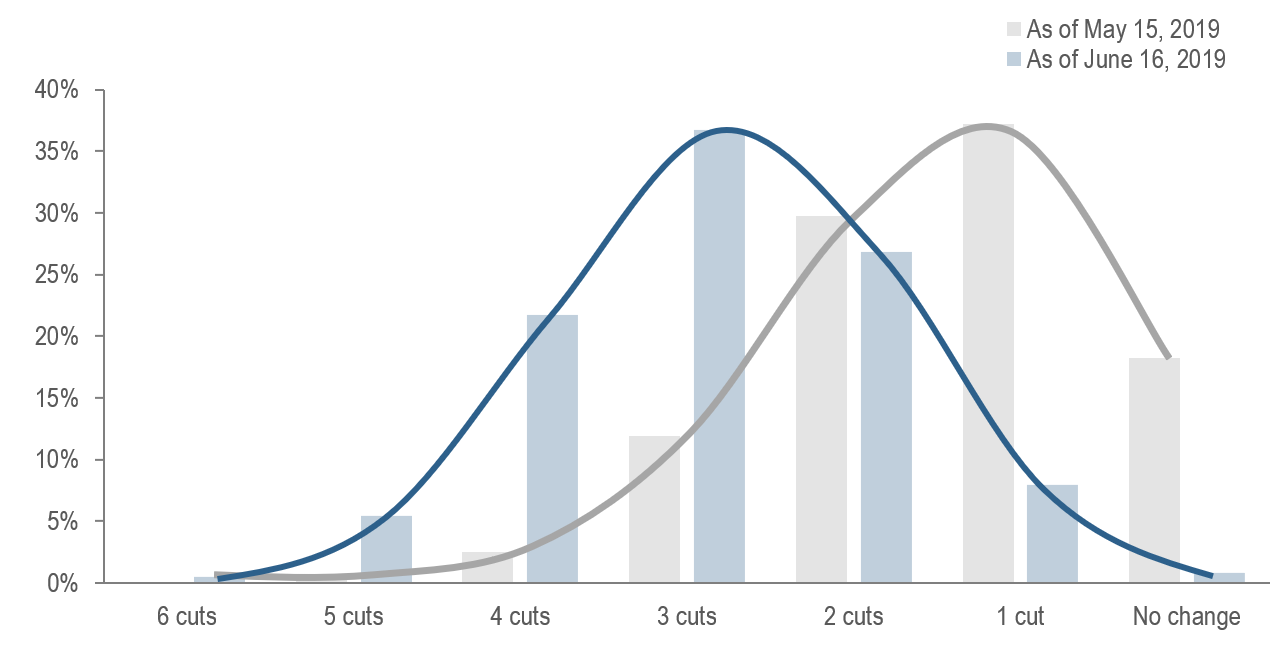 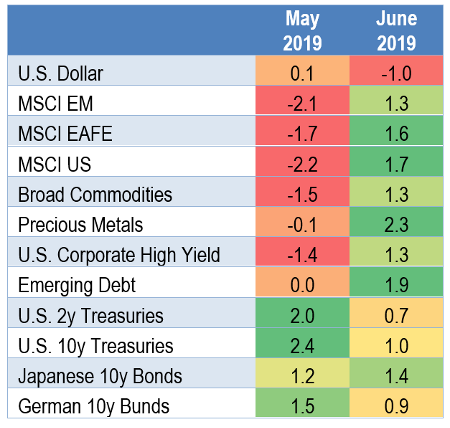 Table shows a simple rolling 3y z-score using monthly total returns to generic MSCI and Bloomberg benchmarks. For fixed income indexes, the corresponding versions of Bloomberg Barclays indexes are used. For sovereign ex-U.S. bonds, U.S. dollar hedged index returns are used with Acadian calculations. Sources: Acadian Analysis, Bloomberg, MSCI. Copyright MSCI 2019. All Rights Reserved. Unpublished. PROPRIETARY TO MSCI. For illustrative purposes only. Every investment program has the opportunity for losses as well as profits. Past performance is no guarantee of future results. It is not possible to invest directly in any index. Bloomberg Index Services Limited. BLOOMBERG® is a trademark and service mark of Bloomberg Finance L.P. and its affiliates (collectively “Bloomberg”). BARCLAYS® is a trademark and service mark of Barclays Bank Plc (collectively with its affiliates, “Barclays”), used under license. Bloomberg or Bloomberg’s licensors, including Barclays, own all proprietary rights in the Bloomberg Barclays Indices. Neither Bloomberg nor Barclays approves or endorses this material, or guarantees the accuracy or completeness of any information herein, or makes any warranty, express or implied, as to the results to be obtained therefrom and, to the maximum extent allowed by law, neither shall have any liability or responsibility for injury or damages arising in connection therewith.

As the Fed converged with dovish market expectations, it weakened the U.S. dollar and triggered a broadbased risk rally in June. (Figure 3) Even precious metals, led by gold and boosted by sharply lower real yields, participated in the broad rally. Developed sovereign bonds continued to broadly appreciate,3 benefitting from risk-off in May and from both global central bank actions and declining inflation expectations in June. Across other major asset classes, the May-June reaction was a smaller-scale repeat of the December-January whipsaw in markets.4

Markets have correctly called the evolution of Fed policy over the past year. Currently, with the continued backing of global central banks, they are discounting scenarios that could favor positive U.S. dollar sentiment, instead pricing in the outcome that aggressive U.S. monetary stimulus successfully staves off deterioration in the real economy. Alternative scenarios would include 1) a continuation or acceleration of the global slowdown that leads to a “flight to safety” favoring U.S.-denominated assets, or 2) quick central bank success in reviving growth and/or inflation expectations that curtails the need for further easing, which would be a jolt to the market. However, under the baseline scenario, as the Fed continues to converge with market expectations, lower U.S. dollar carry would exert downward pressure on the outlook for the currency.