Few topics in the investment industry spur stronger opinions than the price of oil. Today, as the price of West Texas Intermediate crude is approaching a 50% year-on-year increase, there is no shortage of participants projecting a continued spike beyond $100/bbl—or a crash back to $26/bbl. One year ago, in contrast, few analysts strayed far from the consensus forecast and the relative stability reflected in the futures curve, implicitly suggesting that U.S. shale would likely offset any deficit created by OPEC production cuts. Let’s revisit what transpired in the oil market over the past 12 months from a fundamental perspective and see why consensus was essentially forced to mark forecasts to market as oil prices kept rallying. 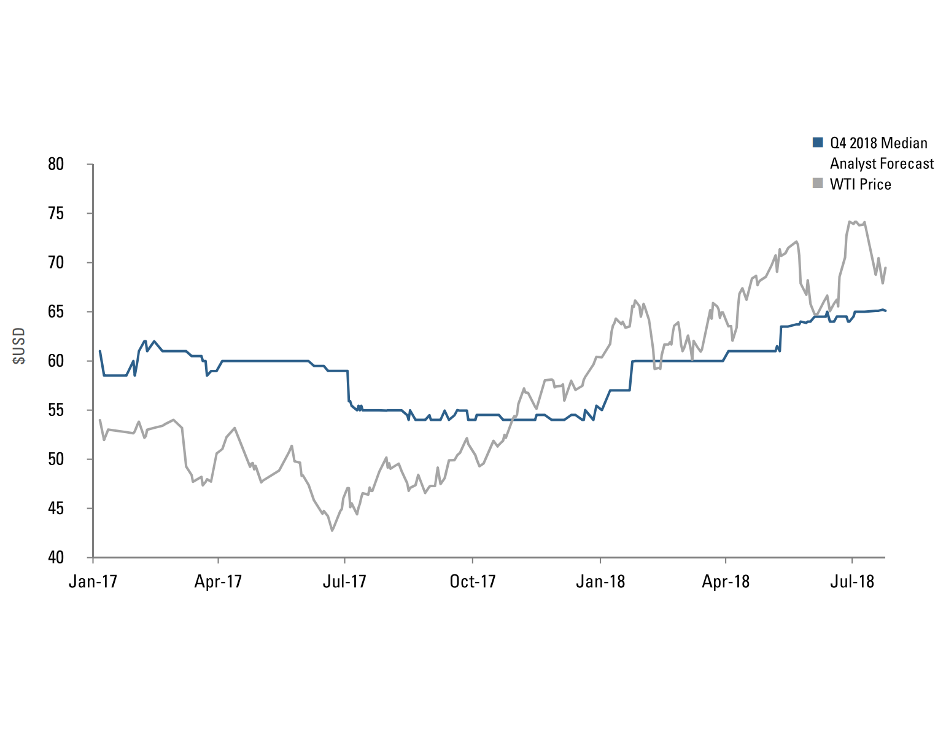 Source: Bloomberg. For illustrative purposes only. It is not possible to invest directly in any index. Every investment program has the opportunity for losses as well as profits. Past performance is no guarantee of future results.

Currently, the gap between global production and global consumption in the oil markets is very wide—the highest on record in terms of barrels per day. This is a product of multiple factors, including a 1.8 million-barrels per-day (mbpd) OPEC cut, unanticipated supply dropoffs from Venezuela and Iran, and limited supply growth outside of U.S. shale. As data from the U.S. Department of Energy shows, inventories in the U.S.—home to the largest refining complex in the world—have been drawing down persistently for the past two years. In fact, strong demand has removed nearly the entire inventory surplus that was created by U.S. shale prior to 2014.

In order to close the deficit going forward, global production must grow by roughly 1.5 mbpd per year. Only three years ago, when the U.S. oil market was still in surplus, U.S. energy investors became so enamored with “drilling discipline” that, in many cases, they demanded exploration and production companies (E&Ps) curtail output. This led some E&Ps to create “pacts” to limit production, shifting cash flows from CAPEX back to shareholders. “Growth” became a censored word on earnings calls.

Today, the repercussions of CAPEX underinvestment are apparent in the relationship between the price of U.S. shale oil in West Texas and that in Cushing, OK. The Permian basin, the most prolific oil patch in the U.S., experienced continued growth in production, but there was minimal investment in pipeline capacity to transport that oil to the market. As a result, light-sweet quality oil in Cushing is trading at a 30% premium to its most significant source location, less than 500 miles away. In addition, export demand from the Gulf Coast is growing. Thus, while the U.S. can surely grow shale production, there will be insufficient pipeline capacity to get this oil out to the market over the intermediate term, which has forced prices higher.

Additional pipeline capacity projects are in progress; however, the pipelines are not scheduled to come online until late 2019. In the meantime, past spending “discipline” has effectively postponed U.S. shale production growth and temporarily ceded market control to OPEC for at least the next one to two years, postponing realization of hopes in the shale community that the U.S. will become the global “swing producer.” 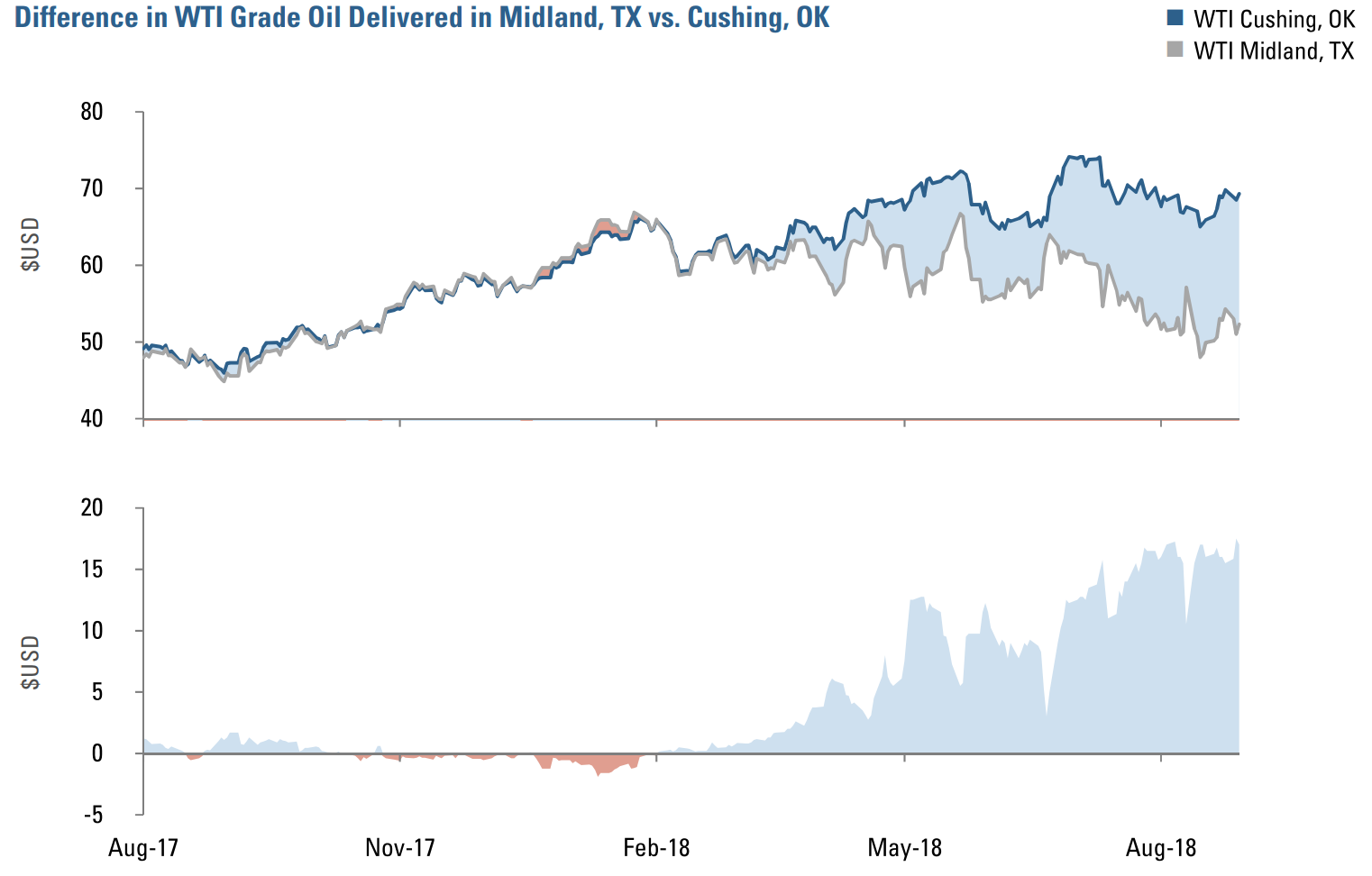 Source: Bloomberg. For illustrative purposes only. It is not possible to invest directly in any index. Every investment program has the opportunity for losses as well as profits. Past performance is no guarantee of future results.

Indefinite postponement of Saudi Aramco’s IPO is further evidence of the oil market’s shifting dynamics, as oil prices are no longer pressuring Saudi Arabia to sell this valuable asset in order to fund its fiscal deficit. Saudi Arabia plans to further reduce its budget deficit to 7% of GDP this year from near 9% last year according to Finance Minister Mohammed al-Jadaan.

The tight physical market is also reflected in a “backwardated” futures curve, i.e., longer-dated futures are trading below shorter-dated. This presents a headwind for U.S. shale E&Ps who often must hedge their future oil production revenue in order to obtain funding; they are selling their oil at a steep discount to current spot prices. In contrast, most OPEC countries operate in the spot market, putting them at a significant advantage over U.S. shale.

Thus, in isolation, the current rates of supply and consumption and their effect on inventories point to a continued upward trend in prices over the intermediate term. In fact, short of a recession, we believe that over the next one to three years fundamentals present one of the most positively skewed price outlooks, before U.S. shale can finally fill the gap. Even moderate decreases in the rate of consumption growth wouldn’t be enough to resolve the imbalance. Annual global demand growth has been resilient and inelastic, averaging around 1.5 mbpd over the long term with actual decreases in demand limited to recessions.

Despite this view, investors shouldn’t blindly go long oil. In addition to fundamentals of the “physical” market, there is a large “investment” market for oil, which facilitates hedging by commercial producers and consumers as well as speculation. As a result, oil prices may be driven by positioning and technical influences, as well as views on macro and geopolitical factors such as currency moves, emerging market growth, and trade disputes. Prices, as a result, may at times diverge materially from physical fundamentals. Because of these varied influences on the market, we believe trading crude oil requires a composite view of physical fundamentals, macroeconomic factors, positioning, and even seasonality.

Over the next few years, we expect oil price volatility to remain elevated. Volatility tends to rise during market transitions from surplus to deficit (and vice-versa). In the past, OPEC has acted as a market regulator, helping to dampen oil price volatility. But now, oil prices are affected by supply dynamics of two large and influential producers—U.S. shale and OPEC— instead of only one.